Seven Viking Days and Once: Once Are Selling Briskly! 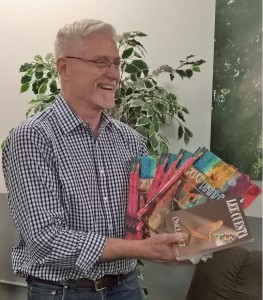 Bill, my friend and colleague, loves books, and he’s so excited about Seven Viking Days that he is the only person so far who has bought TEN copies!  Also, this is the first time that Bill has bought ten books from the same author!  He also bought a copy of Once: Once.  Both of my books sold very briskly with the Holiday discount before Christmas.  Bill made this comment about Seven Viking Days: “The icons in the book are an inspired idea.  And I think this is a book for Adults and Children: The stories are so thought provoking and the illustrations beautiful, colorful and unusual.”  I already autographed all of the books he bought.  The first, of course, was for Bill himself.  On a Thor’s Day (i.e., Thursday), here’s what Bill texted to me: “FYI, Sold a Seven Viking Days book at dentist today, 2 more will order online, and a third is having her local Viking Lodge order one.  Debbie from my dentist office called to tell me she showed the book to her husband who is chief of the Portland Viking Lodge. He thought it was great & plans to use it for their Cultural Moment at the January Lodge meeting. Debbie will take pictures & get them to me for you.” 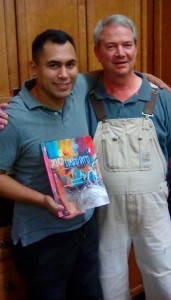 My friend, Jorge, got a copy of Seven Viking Days for his preschool daughter, Naila, for Christmas.  I autographed the book for Naila, and she’ll enjoy listening to her papa read it while she gazes at the vibrant, full-color, 3-D illustrations.  My good friend, Lori, took the photo of Jorge with me, and both Lori and Jorge commented that they felt they could actually touch the three-dimensional (3-D) illustrations. In fact, the original illustrations ARE 3-D, which were then photographed for the book. 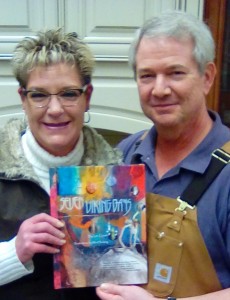 Lori bought two of my Seven Viking Days books: one for her personal library, and another on her grown daughter’s behalf.  And ALSO she took one to show it to her friends in her Taco Tuesday network!  She’d already told them about it, and so the people in her network wanted to see it in order to buy one.  Word-of-mouth is awesome! 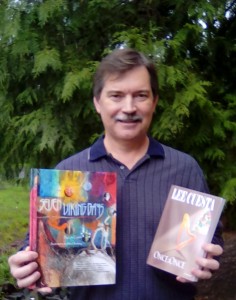 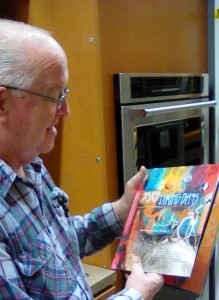 Rebecca had quite a big influence on my book sales!  Besides Stan and Jon (who, by the way, bought another copy of Once: Once), she also told Kelley about my books, and showed them to her, and so Kelley bought one of each.  Kelley was so thrilled and excited to get the books, and she expressed to me such abundant gratitude, that it was really fun to sign my books for her! 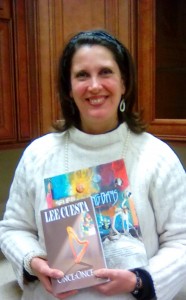 Word-of-mouth AND social media are awesome!  And here is what Rebecca wrote to me after giving Seven Viking Days and Once: Once as Christmas presents: “My parents were really excited to read your book.  My mom marveled at the illustrations and is looking forward to reading it tomorrow.”  Thank you, Rebecca!  Thank you so much for spreading the word about my books not only to your family, but also to your friends. I appreciate you!

As you can see, lately there’s been a lot of buzz about my book, Seven Viking Days.  I just got together with the illustrator, Mia Hocking.  We are selling and signing so many books right now, it’s hard to keep up!  The photo shows Mia signing her autograph. 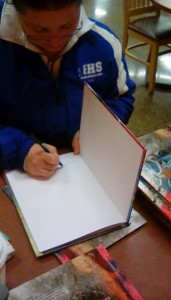 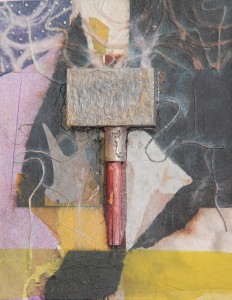 Although she is currently a member of the Sequoia Gallery in Oregon, and has her studio there, she used to have her own, called Misfit Studio. There were a number of reasons for this name.  One of them is that Mia’s passion is mixed media — recycled — visual art. She combines these misfit materials, giving them renewed purpose, and creates artwork that is layered, textured and has three-dimensional depth. The result are works of art that don’t fit easily in any category or genre, like misfits. 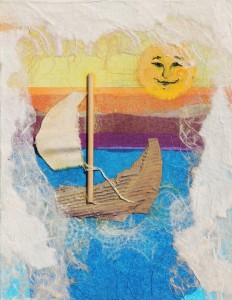 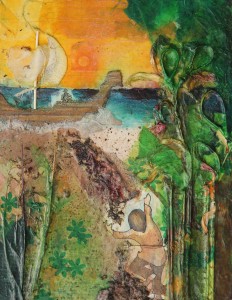 This is the style of art that brings Seven Viking Days to life. Here are three examples. Of course, one is Thor’s hammer, and the other two are the first and last pages of the book.  Mia gave to me the original art for these two pages, and they are hanging side-by-side on my wall at home.