“The referendums are already on the ballots, correct?” 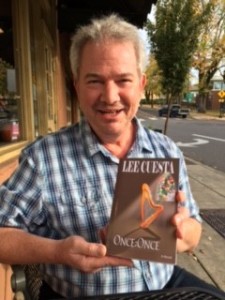 “Yes, sir,” Javier replied.  “The Plan organizers in each state have seen to it.  But sir, that’s the reason I requested this meeting.  I need to explain….”

“I have no other choice.  Our so-called president is forcing me into it.  I do it for the sake of Mexico.  And you’re sure the referendums will pass in all six states?”

“Absolutely.  We reverse-engineered some state-of-the-art systems from an election management company located near me in California.  This is the kind of high-tech wizardry I love. Fancy gadgets.  You have nothing to worry about.  Our software supports the validation of voter eligibility, which allows us to manipulate it as necessary. So stuffing the electronic ballot box was never easier.  It also interfaces with voter information files and absentee balloting modules.  It permits pseudo-numbering of rural addresses, as well as street aliases. And it fully supports remote functions, such as early voting.  Everything is ready.”

“Very good.  I’ve always known that the best way to outsmart a democracy is through its own institutions.  The election process is like an Achilles heel, its vulnerable spot.  Since one single vote is so insignificant, nobody really believes that his vote helped determine the outcome of an election.  So we can report the results whichever way we want, and the population accepts it.  And our computers will back us up one hundred percent, from the voter registrations to  the ballot tabulations.” 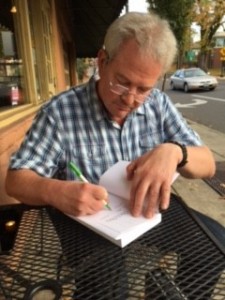 “So then, as soon as the US government refuses to recognize it, I launch my invasion to provide military support to enforce the decision.  And each state that’s represented in the Plan has its own secret militia, already armed, while the rest of the population is restricted by more gun controls.  It’s perfect. My glory.  My son, you are sitting beside the next president of Mexico, a much larger Mexico who has regained her historic boundaries.  I’ve decided that November 11 is the official date for my invasion.”

IN  THE modern era, November 11, or 11.11, is Veterans Day.  And I’ve questioned why Veterans Day is always 11.11, regardless on which day of the week it falls, unlike most other holidays, which got moved to Mondays.  Part of this answer is the fact that Veterans Day began as Armistice Day (also known as Remembrance Day), commemorating the day on which the armistice, or peace agreement, was signed between the Allies of World War I and Germany, for the cessation of hostilities along the Western Front, which took effect at eleven o’clock in the morning — the “eleventh hour of the eleventh day of the eleventh month” of 1918.

To receive a copy of my novel, Once: Once (Or 11:11), send me an e-mail, or contact me through Facebook.  These photos are of my personal book-signing of my novel for my awesome friend, Mel, and she’s holding her new copy of the book. 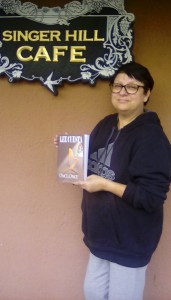 An international newspaper based in Manitoba, Canada, called my book “a thrilling novel of the complexities in Mexico … Like a story lifted off the page of today’s newspaper.”

The novel’s synopsis:  When the independence movement in Chiapas, Mexico, is postponed and a deadly ambush restores the spectre of religious intolerance, Subcomandante Josefa chooses a journey that will enable her to unravel her true identity.  In the process, she discovers an undercover conspiracy not only to recapture territory that once belonged to Mexico, but also to oust Mexico’s current president.  More profoundly, she must face the mystical dimension of this plan, signified by a single moment in time on a digital clock.  This story of epic scale provides a rare and stunning glimpse into the elements that render neighboring cultures so incompatible.

This entry was posted in Other Published Work. Bookmark the permalink.