Being the last month of 2019, I’d intended this blog post to be a ten-year update about the Chili-Tobacco Barrier (CTB) mechanism in southern India.  This refers to the Elephant Barrier Experiment that was spearheaded by A Rocha India in 2009; hence, my idea for the ten-year update. In fact, an excellent video about this was published on YouTube on June 18, 2009.  It describes the plight of farmers living close to Bannerghatta National Park whose crops are often raided by Asian elephants (Elephas maximus). These are marginal farmers with less than an acre of land for themselves.  Their principal crop is Ragi, or Finger Millet, which also is a delicacy for the elephants. Ragi is a whole grain that is gluten-free and a staple in South India.* 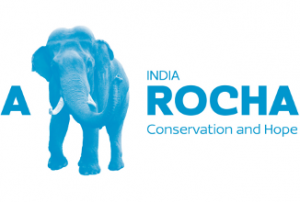 The Barrier Experiment was conducted in the village of Sollepuradoddi, where human-elephant conflict is at a peak.  The barrier consisted of a mixture of chili and tobacco powders in motor oil that was smeared onto a thick rope, which was suspended around the ragi fields.  For this reason, the workers with A Rocha became known as Haggadavaru (the Rope People).  Based on an elephant’s sense of smell, and thus their strong reactions to chili peppers and tobacco as an alternative, natural deterrent, this barrier mechanism was originally tested in Africa.

It proved very successful where it was implemented around Sollepuradoddi. Elephant footprints (pad marks) and dung deposited by nighttime raiders revealed that elephants would not enter fields surrounded by the CTB mechanism, whereas neighboring fields, unprotected, were ransacked, and full of elephant dung and the pad marks.

Mr. Avinash Krishnan told me, “The farmer in the promo video was one of the chief advocates, as the CTB had nearly 90% efficacy in his farm (test-plots).”  Here is what this farmer says: “Before erecting this chili-tobacco barrier, elephants used to enter my crop fields.  After erecting this fence, the elephants still do come, but because of the smell of chili powder and tobacco powder, the elephants have no chance of entering, all because of the smell.  Even though they come close, they just walk alongside the chili fence and go off. They’ve never entered the crop field.”***

So I contacted A Rocha India via email with specific questions concerning the CTB mechanism and its long-term effectiveness.  However, it’s not the type of ten-year update that I expected. The following information was provided by Mr. Avinash Krishnan, currently the Sr. Research Officer at A Rocha and head of all the Science and Conservation programs.  He began his reply to me by stating: “I’m happy to know of your interest in the CTB mechanism that was piloted in Bannerghatta NP to understand its implications of HEC (human-elephant conflict) resolution.”

But then he writes:  “The project was discontinued after 2010, with a last survey done in the mid of 2009, due to the lack of funds to support the farmers of  the area where the pilot tests were conducted.”

You may be wondering why I wanted to write a ten-year update on a project that was discontinued so soon after its inception.  It is because the website, while upholding the barrier experiment as a success, makes no mention of the fact that it was abandoned soon after it was tested.  So the curious inquirer or the serious researcher assumes that the CTB mechanism is still in use.  But this is not the case.

He continues:  “Therefore the long-term efficacy of this barrier system wasn’t assessed systematically and a few farmers discontinued the barriers due to the lack of resourceful for immanence.  (There are) no data on CTB efficacy, as it was discontinued post the initial survey.

“Sollepuradoddi still remains a high conflict zone for elephant raids; however, through A Rocha’s other conflict mitigation initiatives we have been progressing, trying to resolve crop depredations, mainly reducing human deaths due to retaliation.”

I asked him to identify and explain these “other conflict mitigation initiatives,” and he replied:

“Our latest project using technology to mitigate HEC is testing the long-term efficacy of the MATAM (monitoring and trip alert mechanism) early-warning system for human-elephant conflict management in Bannerghatta NP. This is a novel initiative in Bannerghatta and is aimed at improving the existing system of breach detection. Apart from this we have been consistently assisting the forest department  in identifying conflict hotspots for erection of physical barrier systems, such as the railway fence.”

So I asked him, has HEC been mitigated?  In other words, is there greater harmony between humans and elephants?

He wrote: “There cannot be a fool proof mitigation approach to any human-wildlife conflict scenario. Harmony is very subjective, but needs continued engagement and conservation efforts to increase tolerance of people towards wildlife that causes harm to their life, crop and property.

“Our community-based conservation model ‘Bangaloreans for Bannerghatta,’ a citizen outreach initiative, is aimed at curating programs and monthly events to bring in CBC’s to the farmers of the landscape to look at alternative/supplementary livelihood options and also sensitizing them about importance of forests and wildlife through media such as art, natural history and eco awareness.”

HEC is becoming an increasingly potent issue in this region of India, especially as Bengaluru increases its proximity to Bannerghatta NP.  In fact, Krishnan states during a lecture that was recorded and posted on YouTube: “This is perhaps the only national park in the world (Bannerghatta NP) that has a wild tiger and a wild elephant so close to a metropolitan city.  Nowhere else. Nowhere else in the world will you find these two charismatic animals, that are the flagship for conservation, so close to (an urban area; i.e.,) Bangalore. So we are looking at these two species competing with eight million people; … you can imagine the kind of pressures that could exist on this important landscape, an important ecosystem.”

The CTB mechanism “has been implemented in several regions of India (Tamilnadu, Assam, Karnataka and parts of Kerala adjoining elephant habitats), but due to its limited success and long-term involvement of communities for maintenance, it has been mostly discontinued in most of the elephant conflict zones, for other ‘social’ barrier systems. (The) bee-hive fence is the most popular and sustainable method. Its implication for Bannerghatta NP is currently being explored.”  Bee-hive fences as a barrier mechanism will be the topic of a future blog post.

HEC mitigation must recognize the problems and challenges of both the humans and the Asian elephants.  That is why I will be traveling to India in 2020, for my next book: how will these barrier mechanisms contribute to the Indian elephants’ survival . . . or their extinction?  How do they interface with habitat fragmentation? Or migration corridors?

During the test period for the CTB mechanism in 2009, their source for the chili and tobacco powders was “local markets around Bangalore city.”  In order to properly maintain the rope barriers, “the deterrent mixture should be smeared on the ropes at least once a week for great efficacy as understood by our research.”  However, “We do not have any (photographic) content to show elephants near a CTB fence as camera traps where not in development around Bannerghatta NP during the time of testing.”

Have the villagers become autonomous in implementing this mechanism?

“Nope. And can never unless the costs are sustainable for maintenance.”

Therefore, A Rocha India no longer is known as Haggadavaru (the Rope People), but rather “as ‘elephant people’ in a more generic sense.”

So the ten-year update about the CTB mechanism in southern India is that it was discontinued ten years ago.  You’ll want to keep this in mind if you watch any of the videos in various venues online.

Nevertheless, A Rocha India has been “continuing to monitor and manage Asian elephants in this landscape since 2003, using science, education and outreach methods for conservation. The focus now is to expand our work into other elephant landscapes of the country.”  The primary landscape to which Krishnan is referring is called the Brahmagiri-Niligiri-Eastern Ghats landscape, per his YouTube lecture.**  He states: “This is a very important landscape.  And this is probably the only place in India that can ensure the future survival of elephants.”

(Author’s Note: The purpose of this informal blog post is to spark questions and dialogue.  I acknowledge that this post is very informal compared with my full-fledged, crafted and edited articles.  But I felt vindicated when I read this quote from the book entitled Because Internet: Understanding the New Rules of Language, likewise published in 2019: “It’s not that edited, formal writing has disappeared online [there are plenty of business and news sites that still write much like we did in print], it’s that it’s now surrounded by a vast sea of unedited, unfiltered words that once might have only been spoken.”)

Permission is granted to reprint this article in its entirety, or in part, with the condition that its source (this website) and its author (Lee Cuesta) are both acknowledged.