Where are they now?

The next step in my journey brings me to a town called Tualatin, in the state of Oregon, USA. I’ve gone kayaking on the Tualatin River many times. Nearby, in the marshy ground, the partial skeleton of an ancient mastodon was unearthed in 1962.  These bones are now displayed at the Tualatin Public Library. 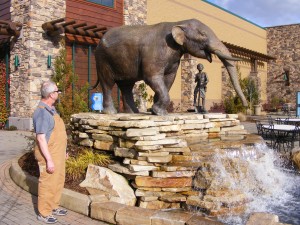 This mastodon became the inspiration for a beautiful sculpture that is exhibited outdoors.  This work of art was created by renowned sculptor Brian Keith. Many of his sculptures include children or youngsters, participating in a playful or fanciful moment.  The Tualatin sculpture features a boy gazing at the juvenile mastodon. And as I gazed at the boy who was gazing at the mastodon, I wondered if the time is coming when the only reminder we’ll have of elephants will be a statue like this one.  In other words, when this fictitious boy in the sculpture grows up, will his only image and memory of elephants be a statue? 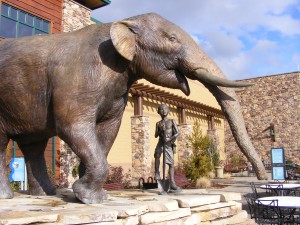 I am especially concerned about the long-term survival of the Asian elephant population, and its subspecies, the Indian elephants, whose numbers have been receding, and are classified as endangered.  Now, I understand that mastodons are related to modern elephants only insofar as they both belong to the order “Proboscidea,” as follows —

Kingdom: Animalia
Phylum: Chordata
Class: Mammalia
Order: Proboscidea
After this, mastodons belong to the Family “Mammutidae” and the Genus “Mammut,” whereas Asian elephants belong to the Family “Elephantidae” and the Genus “Elephas.”  In this way, the Asian elephant is more closely related to the mammoths, who likewise belonged to the Family “Elephantidae.”
But my point is this:  Once upon a time, there used to be mammals of the order “Proboscidea” on the North American continent.  Where are they now?
. 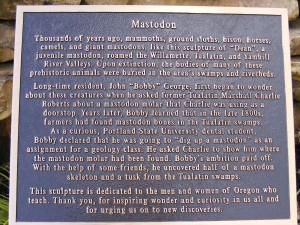 The fact that the Indian elephants face possible extinction was confirmed in a conversation I had with Kartick Satyanarayan, co-founder of Wildlife SOS.  I spoke with him while conducting research for my full-length article about Gajraj that I published on my blog in August, 2017, which is available here.  Kartick told me, “So basically, if you look at the whole world, we’ve lost 98 percent of the wild population of the Asian elephants.”  I asked him, “Do you think that it depends upon this generation or the next to prevent their extinction?” 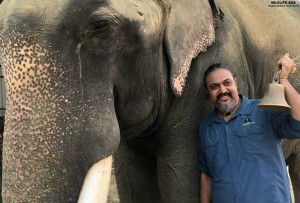 Kartick responded, “Absolutely. It is really this generation or the next that can do something if there is to be hope. Otherwise, in five years, we could have no elephants. Our children and grandchildren might have to be shown elephants on photos and videos and Youtube, and there wouldn’t be any elephants left in the world.  That is not a distant chance; it is a very real possibility if we are not careful.” He added, “It is frightening and it shows how much on the edge we are, and it’s a very fragile system and a very fragile state for this planet and for its denizens.”

I recently watched the Context talk on YouTube by Mr. Avinash Krishnan entitled, “Postcode Elephants,” in which he affirms that the final opportunity for the survival of the Indian elephant population may reside in the Brahmagiri-Niligiri-Eastern Ghats landscape, located in southern India, which includes  Bannerghatta National Park.

For this reason, I will be traveling to southern India this year to conduct firsthand interviews and investigation, probably involving volunteer work.

Although at this time I am not at liberty to divulge the content of the outline for my new book, these themes are central to it: 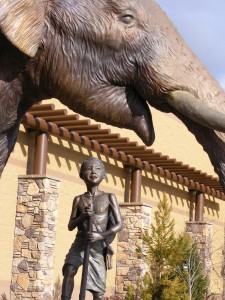