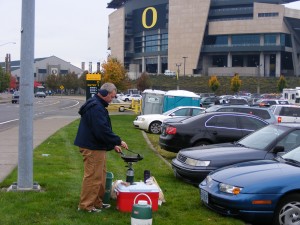 A sidebar, of course, is a shorter, related piece that accompanies a larger article.

For example, every article that I’ve had published in InSite magazine has required a sidebar.  So this is a sidebar that accompanies not only the two-part blog post that follows, but also the one that will precede this.

I wanted you to see this photo of me “tail-gating” outside of Autzen Stadium in Eugene, Oregon, during the Festival of Bands 2010.  On top of the Coleman cooler, I have a single burner attached to a one-pound propane tank, which I’m using to heat up some chili and beef stew.  Several other band parents walked by and said they’d be back when it was ready, but they never returned.

Anyway, Autzen Stadium provides an athletic backdrop that made me think of an Olympic Gold Medalist named Dick Fosbury.  Although Autzen Stadium is at University of Oregon (my alma mater), Fosbury graduated from Oregon State University.  But beyond that difference, there are some intriguing similarities between Fosbury’s life and mine.  Like me, he was born in Portland, Oregon.  He is a Baby Boomer, like me.  Then, also like me, as a youngster with his family, he moved to Medford, Oregon.  He graduated from Medford High School in 1965, where he had first started experimenting with a new high jumping technique.  Living in Medford, Oregon, in those days, we definitely knew about Dick Fosbury.  When we did the high jump in PE class, we all tried the Fosbury Flop.  Fosbury revolutionized the high jump by introducing his back-first technique, which became known as the “Fosbury Flop.”  Almost all high jumpers now use this technique.  With it, he won a gold medal at the 1968 Olympics in Mexico.  (I also lived in Mexico City for a while, and I wrote about the 1968 Mexico City Olympics in my novel.)  In fact, at the 1968 Olympics he set high jump records that still remain unbroken.  Dick Fosbury was inducted into the USA Track & Field Hall of Fame in 1981.  He won the following awards due to his innovative style: