So, what is the real-world value for all the hours invested?

Here is my answer. 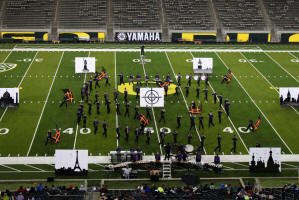 A couple weeks after the competition in Eugene, I was in a large, home improvement store.  I saw a youth (accompanied by his parents) wearing a jacket with the embroidery, “Sunset High School Marching Ensemble.”  I asked him if he’d participated in the Festival of Bands at Autzen Stadium.  He said yes.  And I told him how much I’d enjoyed Sunset’s award-winning performance.

I told him that my son had performed with Tigard High School, and then the youth’s mother said how much she and all the Sunset parents enjoyed Tigard’s performance.  In fact, she said that she was going to send a letter to the directors of Tigard’s marching band to tell them how much the Sunset parents thought that Tigard’s performance excelled in entertainment and creativity.  I realized that this was a very significant compliment – coming from the band who won everything in their division.

For most of my life, I faltered with the concept that what I should be doing was either: a) something I didn’t enjoy doing, or b) something that was for others, not for myself.  It was the whole “self-denial” thing to an extreme.  But was it misguided?  If I’m denying my self, then am I really fulfilling what I was put here for?

Now that my life is half over, I am beginning to practice the idea that I should pursue what I enjoy, and that will likewise lead to success.  It’s a weird feeling – like, life can actually be fun, rather than the daily chores.  It may seem peculiar – to others, to the bystanders – like watching a marching band; but it’s the right thing. 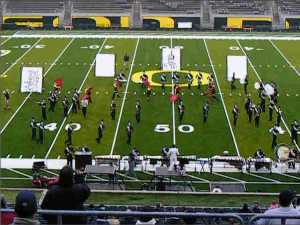 The marching band has taught me an important lesson.  The students participate because of sincere enjoyment.  They learn the value of commitment, perseverance and dedication despite the extreme effort.  They learn about working as a coordinated team.  All this is essential in the “real world.”  Indeed, the massive coordination of everybody is absolutely awesome:  not just the band, but also the additional personnel required for getting on and off the field quickly; and, of course, the performance itself.  And this massive coordination and commitment results in recognition and praise from peers (i.e., Sunset’s marching band).  This is what is required to obtain success.  That is real-world value.